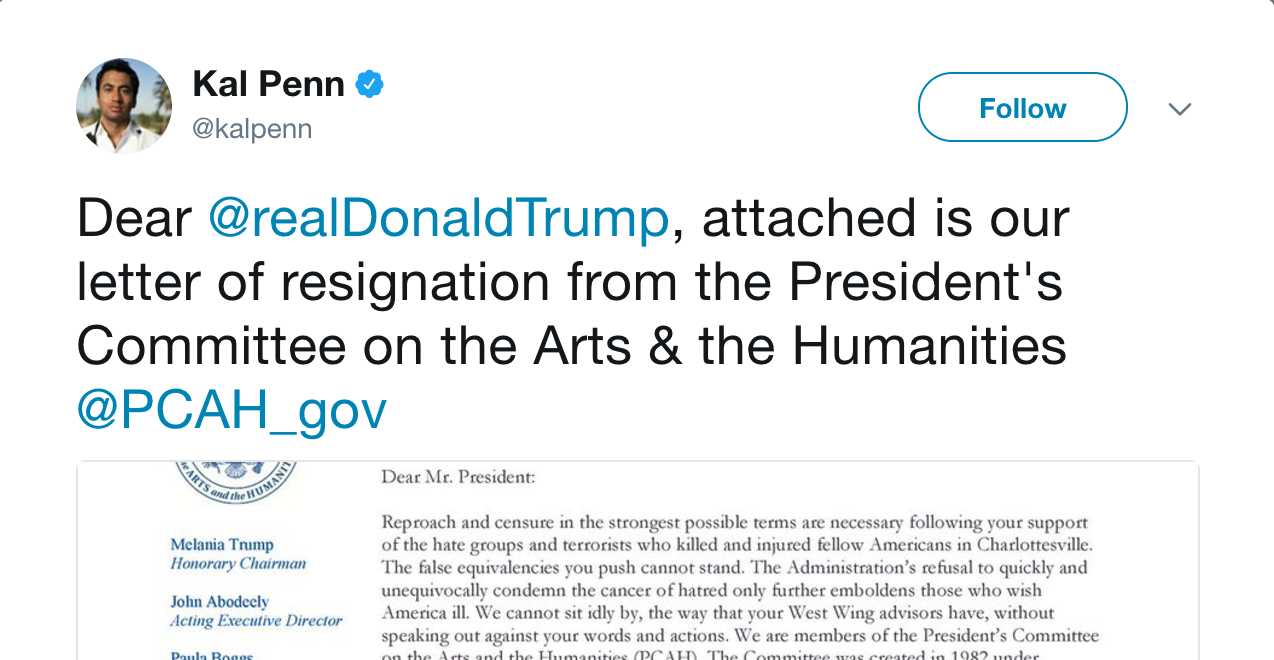 As the terrible and chaotic whirlwind that is the Trump presidency continues to wreak its havoc on the United States, more and more cabinet and committee members are abandoning the sinking ship. Today, the entire White House arts committee quit.

And their resignation letter is beautiful.

The President’s Committee on the Arts and the Humanities was implemented by Ronald Reagan in 1982. The PCAH is comprised of artists, architects, performers, and writers who are tasked with advising the White House on cultural issues.

Today’s committee members were selected by President Obama, and had never convened under the Trump administration. Several of them resigned when Trump was elected. The others stuck around, according to the New York Times, “to try to have an impact in his administration.”

Related: To My Friends Who Are Sick Of Politics

The PCAH website’s statement on cultural exchange, written while Barack Obama was in office, says, “International cultural exchange and cooperation in an increasingly interconnected world is more important than ever. By fostering connections with audiences in the U.S. and abroad, the President’s Committee seeks to share ideas, broaden understanding of the riches of cultural traditions from around the world and expand cooperation to sustain and nurture artists, scholars, performers and institutions.”

In the past, members of the committee have “adopted” low-performing schools to work with at-risk students. This program, Turnaround Arts, has succeeded in increasing student attendance and grades.

Today, all remaining sixteen members resigned in protest. This decision comes after Donald Trump’s recent shocking support of so-called “alt-right” white nationalists who marched in Charlottesville, Virginia on August 11th, 2017. The march led to the death of an anti-racist activist, who was killed when a white supremacist drove his car into a crowd of counter-protesters. Donald Trump refused to condemn them for days. The day after he finally, specifically spoke of hate groups, he walked back his comments and left all reasonable people horrified when he stated there were “very fine people” marching amongst the raging neo-Nazis and white supremacists.

The sixteen members all signed a letter of resignation, which is beautifully written and includes the following sentiments:

The letter also contained a hidden anti-Trump message: The letters at the beginning of each paragraph spell out R-E-S-I-S-T, because sometimes the world is wonderful and beautiful, and of course people of the arts and humanities would craft such a brilliant thing.

You can read the letter in its entirety below.