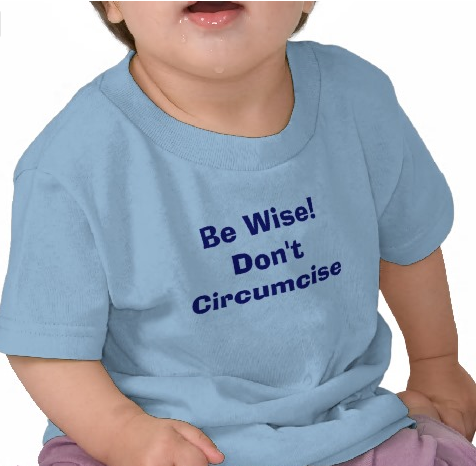 Consent is a very important part of medical practice. It is something that we discuss often on MotherWise. There are several consent issues with routine infant circumcision (RIC). The first is with the baby. An infant is unable to consent, and any body altering surgery that is not medically necessary should only be performed with the consent of the person it is being performed on. The second consent issue with RIC is with the parent(s) or guardian(s) of the newborn/infant. Most parents/guardians are not fully aware of the risks of this procedure. In fact, most believe the myths that have been spewed in our society for generations, myths that have been debunked many times throughout the years.

When I was pregnant, I researched everything (or so I thought). I knew I wanted a 100% natural birth. I had watched The Business of Being Born and the thoughts of Pitocin or Cytotec scared me to death. The complications from epidurals were far too much for me to take in, and the idea of needles has always made me queasy. Natural birth seemed like the only option for me.  I was iffy on vaccines, so I received copies of mine and my siblings’ vaccine records and compared them to what is recommended today. I was totally blown away. That was an easy decision also. I realized that when we were young, we were recommended about 10 vaccines total.  Now they recommend over 49 vaccines before the age of 6.

Somehow, in the midst of knowing our healthcare system was failing us, I still failed to research the one thing that effected my son the most: circumcision.

As a mama regretful of circumcision, I can say this: not everyone who circumcises their son does so because they refuse to acknowledge facts. In the American culture, we are trained from childhood to trust our doctors and follow orders. Our school systems teach us to obey authority and to follow the leader. Often times, young adults have not yet learned to research for themselves. We, as a society, must change this. We must teach our children to research things and find the truth amongst the political agendas. The truth is, for many people to admit there is something wrong with circumcision, they have to admit they made a mistake that permanently affected their child.  I, unfortunately had to learn the hard way. Nobody told me the truth and I was gullible enough to believe the myths. This is a heartache I will face for the rest of my life.

On the day my son was born, I was overwhelmed with emotions and hormones. I had just experienced the most amazing feeling of my life, natural birth. My Oxytocin levels were through the roof and my heart was filled with joy. I had the most intense thoughts and feelings of protection over this baby I had just brought into the world. It was amazing to me that I already had feelings so strong over a baby I had just held for the first time. I was willing to give my own life to protect this blessing I call my son. I wanted to do everything right for him, give him the best start possible. We delayed cord clamping, I breastfed him immediately following birth, and I made the best decisions I could with the info I had. This is where uninformed consent comes into play. When it comes to birth procedures, many people in the medical profession fall into routine. Basically, they decide what is “best for the overall population” and carry this out for everyone, disregarding specifics of each situation. Circumcision is one of these “routine” practices in America, where often times the truth is hidden until it is too late.

When asked about circumcision the conversation went like this:

“Do you have a pediatrician picked out yet?”

“Do you have a written birth plan for me?”

“Are you going to have your son circumcised?”

Seriously….it was that simple to discuss. Something is wrong here. Never once was it mentioned that over 100 babies a year die from this unnecessary cosmetic procedure. Never once was I told that insurance companies don’t cover this procedure because it is listed as cosmetic, just like a breast enhancement or nose job. Never once was I told  that adhesions after the surgery were a regular problem and that I would have to lather my son’s penis with petroleum based Vaseline to keep it from sticking back together and causing MORE problems. Never once was I told “it’s okay to LEAVE HIS PENIS ALONE.” I was uninformed of the risks. I had no clue that over 80% of the world’s men are intact, or whole, just the way they were born, and that what I was doing to my baby was not only unnecessary (medically speaking) but that I was also putting him in the minority by allowing this to be done. I had no clue that erectile dysfunction was a side effect of circumcision. I hadn’t even considered the scar that would be permanently embedded on his penis. And it certainly hadn’t crossed my mind that this could effect his sexual partner one day.  I had no idea that the foreskin provided natural lubrication for sex and or that foreskins were sold to cosmetic companies to make “anti-wrinkle” face creams. That’s how valuable they see the skin. It’s not simply thrown away, it’s sold for profit. That’s right. You read that correctly. IF you choose to have your son circumcised, there is a chance his foreskin will be made into a facial cream and rubbed all over someone’s face later. If that isn’t disturbing, I don’t know what is.

If I had known the FULL truth, and not the myths, I would have NEVER allowed this to be done to my son. I am his mom. I am here to protect him, and due to hidden facts, I let him down.

I am upset with myself for not researching more. I am upset with the medical “professionals” who did not disclose the truth to me before taking my son away to remove a fully functioning organ from his body. I’m upset with our society for continuing to perpetuate this cycle by calling it normal. And this is why I speak out. I hurt for the other mamas who are in my shoes. The mamas who would have never done this had they known the truth, the mamas who found out too late to save their sons. But I know this: those mamas, myself included, have a very powerful voice on this topic. I have seen the issues first hand. My son had adhesion issues. I took him to the pediatrician because his penis was red, swollen and looked infected. And YES, I cleaned it and lathered it with Vaseline just like I was told (ignorantly following instructions without researching). When the pediatrician looked at his penis, he said nonchalantly, “Oh, I see this all the time. It’s really nothing to worry about. Just keep lathering it up and it will heal properly soon.” Then he ripped the skin apart, sending my son into a wailing cry that I had never heard before, and to this day have never heard again. It broke me into a million pieces. I was terrified that this was something that happens “all the time” and that it was “nothing to worry about.” I’m guessing the same pediatrician who told me this would have been worried if HIS penis was red, swollen and infected like my son’s. I was nothing less than disgusted. This is where my journey to finding the truth began.

As soon as I got home from the pediatrician’s office, I began to research. I was not really sure where to begin, so I started searching for mama groups on Facebook in hopes of finding someone else who was in my shoes. Someone had to understand my pain, my total dismay at the lies I had been fed, the torture my son had endured due to my ignorance on this subject. I was determined to learn more. This is when I found MotherWise. I realized I was not the only one who was led blindly to have my son mutilated thinking it was “healthy.” I realized that other mothers still thought it was healthy and were spewing the myths and believing their doctors because they were “professionals” on the topic. Since then, I’ve become what many call an Intactivist. I have met some of the most passionate people while fighting to make routine infant circumcision illegal in the US. And I have met many men who complain. Circumcised Men Do Complain  I urge all parents to do thorough research on this topic rather than following the status quo.

One thought on “Guest Post: Circumcision Part 1: Uninformed Consent– The REAL Dangers That Doctors Don’t Tell You About”