In a wildly misguided expression of misogyny and toxic masculinity, a lawmaker in the New Hampshire State House expressed his desire to sexually assault mothers who breastfeed in public.

A 2016 bill proposed in New Hampshire would make it a misdemeanor for a woman to expose her nipples in public.

Thankfully, breastfeeding mothers are exempt from the law.

However, before the exemption status was known, State Representative Amanda Bouldin (D) posted her concerns on social media, stating, “The very least you could do is protect a mother’s right to FEED her child.”

Her concerns prompted a response from two of her peers, who decided to suggest sexually assaulting women who breastfeed in public. They also inserted a wholly unnecessary jab at Ms. Bouldin’s sexual attractiveness.

The sponsor of the bill, State Representative Josh Moore (R), responded to Bouldin, writing the following:

“If it’s a woman’s natural inclination to pull her nipple out in public and you support that, than [sic] you should have no problem with a mans inclantion [sic] to stare at it and grab it. After all… It’s ALL relative and natural, right?”

An elected official who is supposed to represent the interests of the people in his area felt it was appropriate to forcibly grab a woman’s breast because she is breastfeeding in public.

Representative Moore’s statement is outrageously problematic for a number of reasons. He implies that the only reason mothers breastfeed in public is because it’s “natural,” rather than breastfeeding because our child is hungry, and therefore everything that comes naturally to Mr. Moore — sexual assault, by his own insinuation — is also acceptable.

This simplistic view of breastfeeding fails to acknowledge that the true reason we breastfeed in public is not solely because it’s natural, like men grabbing breasts, but because our children are hungry or need comforting.

When I go grocery shopping and my baby needs to eat, I will feed him as I shop rather than retreating to a bathroom — often the only place to breastfeed in hiding.

When I’m at the library with my children, I will sit down and nurse my baby as needed, rather than wrangle up my older kids and run to the car or bathroom every time.

Related: This is Why I Breastfeed in Public

I can’t use a nursing cover, because they’re a hassle and my kids have always refused them. Since I breastfeed as recommended (at least two years), I’d rather not have to battle a cover and my toddler every time he needs some milk.

More importantly, I won’t use a nursing cover because there is no reason to.

I understand that our society has decided that female nipples are among some of the most shockingly scandalous sights to see, but some societies have decided the same about the female ankle or a woman’s hair, and I’m not particularly invested in those societal rules either.

My breasts are for feeding my children.

Any shock and outrage that comes from catching a glimpse of the act is on the person who finds it problematic, just like if someone finds it inappropriate for a woman to show her hair. Because they cannot control her, and because their opinion is based on cultural conditioning and nothing more, it is on them to look away rather than to police other people’s bodies.

Representative Moore’s comment also strongly suggests that men are beasts who are incapable of controlling their sexual urges in public.

He states that if it’s “natural” for women to expose their nipple in public, then we should have no problem with a man staring and grabbing said nipples — which absolutely is sexual assault — because it’s only natural, right? This would, of course, mean that men should not be allowed on beaches or at pools because it’s only “natural” for them to grab women they find attractive.

Related: This is Why I Breastfed Another Woman’s Baby

This is not only inappropriate commentary, it’s also very frightening. It is genuinely scary that a man, never mind a state representative, would legitimately suggest such a thing. Perhaps he would try to excuse it by saying it was just a “joke,” but the fact that Rep. Moore was able to conjure up such a “joke” is genuinely alarming. It’s neither funny nor appropriate to joke about sexually assaulting women.

His comment is rape culture 101 — essentially, she was asking for it.

It is the typical response to any story of rape: Well, what was she wearing? If a woman breastfeeds in public, she’s asking to have her breasts grabbed, and if a woman wears a short skirt, she’s asking to be raped, because men simply cannot control themselves. This attitude speaks volumes about who Josh Moore is as a person, and likely how he was raised. Someone forgot to teach him that he is not owed a woman’s body, and no matter how much skin she is or is not showing, her body belongs to no one but herself.

And this debacle wouldn’t be complete without someone weighing in to make a personal dig at Representative Amanda Bouldin for standing up for the rights of breastfeeding mothers. State Rep. Al Baldasaro (R) did just that. He injected himself in the conversation simply at let Bouldin know, “Your nipple would be the last one I would want to see.” 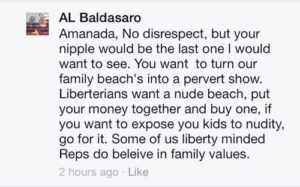 Ah yes, “liberty-minded.” Because nothing screams “liberty” like staring at and grabbing the breasts of nursing mothers, and qualifying their worth based on how attracted you are to her nipples.

Representative Moore has since withdrawn his name from the initial bill, and offered a bizarre non-apology in which he claimed that his comments (which were screenshotted and not altered in any way) had been misrepresented.

Not only is Rep. Moore a juvenile, puerile miscreant, he is also unable to take responsibility for his incredibly inappropriate comments, showing not a single glimpse of personal growth from this incident. We can only hope that he has learned some kind of lesson, but in the meantime, I will continue to breastfeed in public, which never has been and never will be an invitation for sexual assault.