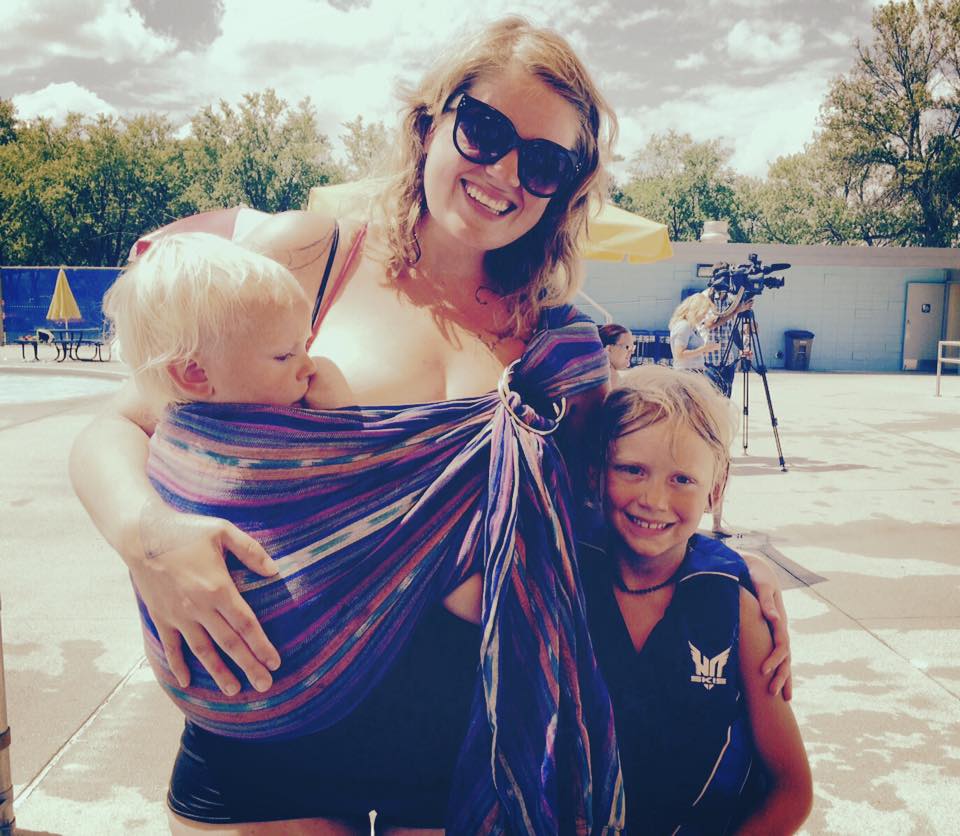 Yesterday I attended my first nurse-in, a response to an incident at a local pool where a mother was told to cover up while breastfeeding her infant. It’s unfortunate that we have to organize such events, but it was an empowering experience, and it was good to see so many breastfeeding mothers come together in solidarity.

If you happened to be working at the pool yesterday, I know it must have been tough for you to witness so many breastfeeding mothers in one spot, as I understand that you were the one who initially reported the mom who was feeding her baby.

I have some questions for you, but first I want to help you understand why a woman might feed her child, in public, without covering. There are a few reasons:

It’s hot outside, and covering isn’t easy. It was about 85 degrees on the day you reported the breastfeeding mother to your superior. Imagine sitting under a blanket, in 85 degree weather, in the hot summer sun. Imagine that you’re also skin-to-skin with another human being, while you’re trying to eat in this unforgiving atmosphere. Now imagine you’re a baby, and you don’t have the reasoning skills to understand why you should be stifled. But you do have the motor skills to tear the cover off repeatedly. I bet you’ve grasped my point. If not, grab your nearest friend, a blanket, and a burger, and try it out.

There is nothing about breastfeeding that is inherently bad or worthy of being hidden. You’ve likely been taught to believe that breasts are sexual and naughty and primarily toys for men, but it’s not true. Breasts are for feeding babies. Hands can be sexual too, but I still use mine to eat in public.

We can’t run and hide. Many of us breastfeeding moms have multiple children. Are we supposed to leave them unsupervised in the pool, or wrangle our children every time our baby wants to eat, so we can go hide in a bathroom? I would welcome anyone who thinks this is an easy solution to try being a mother for a day.

Solidarity. We breastfeed in public to encourage other moms to do the same. When people report us as though we are criminals doing wrong, it can be a little discouraging. We want to empower other mothers.

Exposure. More people need to see breastfeeding. The more people see it, the more normalized it will become. My kids will grow up seeing it, it will be normal to them, and thus they will not degrade, objectify, or leer at nursing mothers.

Public health. Discrimination against breastfeeding mothers affects breastfeeding rates, which is a public health issue. The World Health Organization recommends at least 2 years of breastfeeding, and estimates that millions of dollars and thousands of lives would be saved every year worldwide if more people breastfed.

It’s legal. Minn. Stat. § 145.905 provides that a mother may breastfeed in any location, public or private, where the mother and child are authorized to be, irrespective of whether the nipple of the mother’s breast is uncovered during or incidental to the breastfeeding.

It’s super easy to look away. No, really, it is. Anyone who catches a glimpse of a child eating and feels bothered by it can simply turn their head and look away.

Related: Senator Makes History By Breastfeeding Her Baby In Parliament

I hope that clears up any misunderstandings about uncovered public breastfeeding, why we do it, and why covering is unnecessary.

Now, onto my questions:

Why were you watching this mother instead of the pool? Isn’t your job to keep a watchful eye on the pool to make sure no one is drowning?

I presume you’ve seen women in bikinis all summer long. Do women in bathing suits make you uncomfortable as well? If so, maybe working at a public pool isn’t the right job for you? If not, does that imply you’re comfortable with breasts as long as there is a sexually attractive aspect to their display, but when breasts are used to feed a child (their primary purpose), it makes you uncomfortable? Doesn’t that seem kind of entitled?

Did you ever think about just looking away, considering that it’s nothing more than a mother feeding her child?

Thank you for your time.