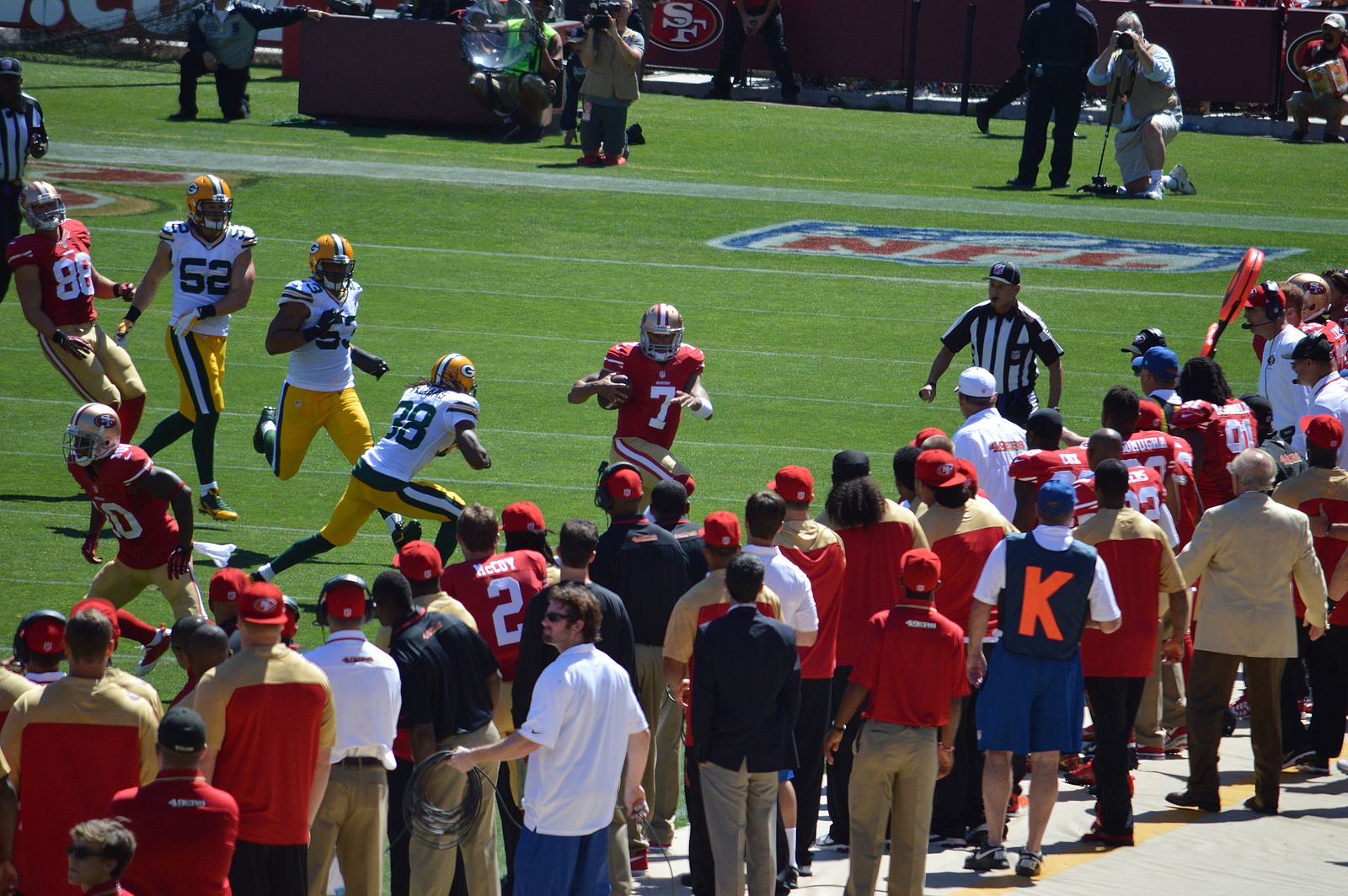 Former San Francisco 49ers quarterback Colin Kaepernick was the first NFL player to take a knee during the National Anthem as a statement on the USA and its proliferation of police brutality and systemic racism.

If peaceful protests did nothing, the powerful wouldn’t try so hard to silence them. #TakeAKnee pic.twitter.com/0aONI66gJF

Since then, several other athletes have joined in this symbolic, peaceful protest — including soccer player Megan Rapinoe, several members of the WNBA, and an entire third grade football team.

Today, a record number of athletes showed their support.

New York Daily News reports at least 27 kneeled during the anthem before the Baltimore Ravens vs. Jacksonville Jaguars game.

Players from the Miami Dolphins and the New Orleans Saints also kneeled.

National anthem singer Rico Lavelle ended the song on one knee with his fist in the air.

Many players who didn’t kneel chose to link arms in a symbol of solidarity.

One Carolina Panthers player, and the entire Pittsburgh Steelers team stayed off the field until the anthem was over.

Related: It Was Never About The Anthem

NFL players were not alone in their actions today.

From the @sfchronicle’s Santiago Mejia, here is A’s rookie Bruce Maxwell becoming the first MLB player to take a knee for the anthem: pic.twitter.com/q8QVY9hW15

Australian tennis player Nick Kyrios also showed his support by taking a knee before a match.

Nick Kyrgios just took a knee before his warm-up vs Federer. He’s not American and there was no anthem, but that’s how you show solidarity. pic.twitter.com/IE6JemonLd

Even Stevie Wonder took a knee before his concert.

The increase in solidarity is due to recent comments made by Donald Trump.

In a rambling, incoherent, angry rant — which was supposed to be a campaign rally — Trump made an assortment of shocking comments, attacking NFL players, their mothers, and new laws aimed at protecting athletes from severe brain injuries.

“Wouldn’t you love to see one of these NFL owners, when somebody disrespects our flag, to say, ‘get that son of a bitch off the field right now, he’s fired?’” Trump said.

Trump also took aim at the new NFL rules, claiming that they “ruin the game.” The rules have been implemented as a measure to protect players against chronic traumatic encephalopathy (CTE) — a severe brain injury which can cause violent, erratic behavior and suicide. 99% of deceased NFL players whose brains have been studied showed signs of CTE.

Since the bizarre, inflammatory, narcissistic speech, several athletes have tweeted their support for the peaceful protestors.

We’ll “stick to football” when we see progress. Our Nations leader can’t even set a good example of how it looks to be a great American

Patriotism goes beyond a flag and an anthem

#Kaepernick we riding with you bro ✊?

The NFL released an official statement on the controversy, showing support for their players.

Choosing to kneel during the National Anthem is not a sign of disrespect towards soldiers, nor towards the piece of fabric which represents the USA.

It is a statement on the United States’ claims of liberty and justice for all, and how drastically we are failing.

Research has shown that black women are more likely to die during childbirth, more likely to experience birth trauma and unnecessary birth interventions, and less likely to receive breastfeeding support.

Patients of color are less likely to receive compassionate care within the medical system.

Black children are punished more harshly in school than white children for the same infractions.

People of color are punished more harshly than white people for the same crimes and with the same criminal backgrounds.

Applicants with “black-sounding” names are less likely to be hired.

Several banks, landlords, and car dealerships have been successfully sued for discrimination against people of color.

There is ample evidence that systemic and overt racism are still present in the USA today. Liberty and justice for all is a supposed American value. The USA prides itself on the notion of freedom, and yet inequality is still rampant — and on the rise, thanks to a president who openly sides with white supremacists. A popular parroted point is, “If you don’t like it, leave.” Protest is an inherent part of US history.

The most American thing we can do is stay, call out inequality, and fight for change.

Author’s Note: I owe my entire education on these topics to black people, black women in particular. I pay my dues here:

Click here to learn how to do your part in fighting racism.