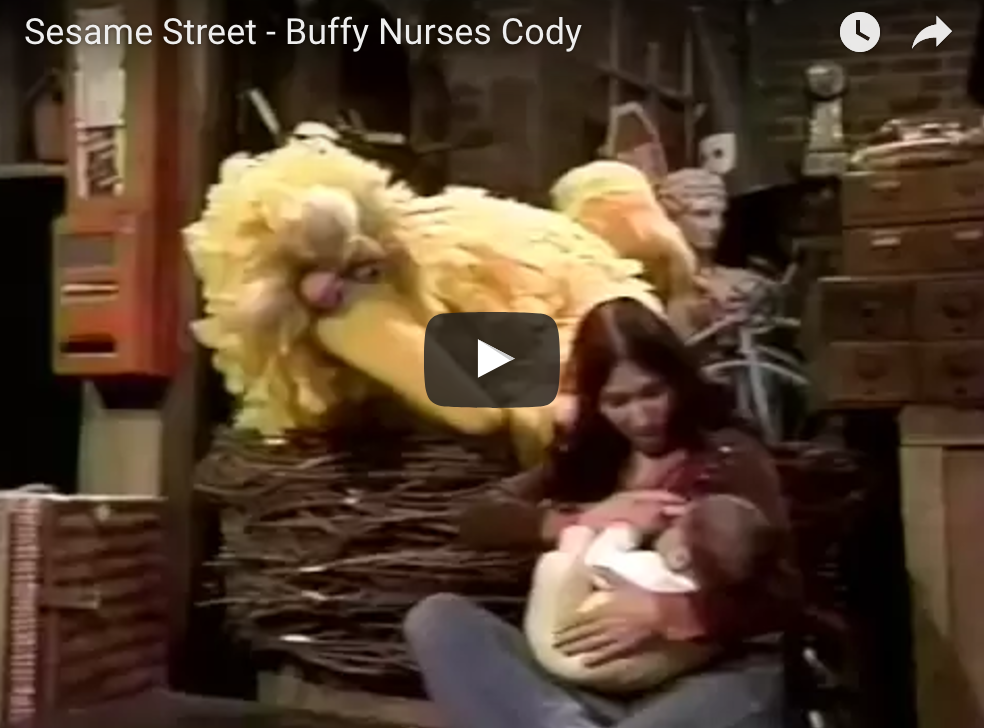 Approximately 40 years ago, the ~brazen~ act of feeding a child was featured on Sesame street.

1977 was clearly a different time than 2017 is, as evidenced by this video showing breastfeeding, uncovered and unashamed, on a children’s program.

Native Canadian musician, educator, and activist Buffy Sainte-Marie was featured on Sesame Street in the 1970s. This in itself was a powerful action, as it was — and remains — uncommon to see indigenous women on mainstream television programs.

But even more revolutionary was the decision to feature breastfeeding on an episode of the show. In a clip titled Buffy Nurses Cody, Sainte-Marie is seen nursing her baby, Dakota (Cody).

When asked by Big Bird what she’s doing, she plainly states, “I’m feeding my baby; see, he’s drinking milk from my breast.”

Buffy goes on to explain that lots of moms feed their babies this way (but not all moms), and that her baby really likes it because it’s warm and sweet, and she gets to hug him while she nurses.

She also describes her baby’s need for breast milk, and how it differs from when he was a newborn.

The unfortunate reality is that it’s very hard to imagine this taking place on Sesame Street today.

There would be outrage. Our culture has become so hyper-sexualized since Buffy’s appearance that any form of public breastfeeding (never mind on children’s television) is frequently compared to public fornication, urination, and defecation.

Related: This is Why I Breastfed Another Woman’s Baby

Mothers who feed their children in public are told they are exhibitionists, inappropriate, and desperate for attention. One of the major concerns I hear is, “Think about the children!” How will I ever explain breastfeeding to my child? Breasts are sexual private parts — how am I supposed to excuse this?!

We are told that we could easily pump (and sterilize the pump and bottles, carry the bottles and milk around with us everywhere, keep the milk at the correct temperature, and find time as busy moms to regularly pump, while hoping our bodies respond to pumping effectively enough to build the supply needed to be certain we never have to scar anyone with the view of a couple inches of our chest flesh, lest we ever need to breastfeed our children in public).

We are told that we should find a bathroom to nurse in, whether or not we have other children out with us in public who might not enjoy going to the bathroom with mom every time their sibling is hungry.

Sometimes we’re even told we should stay at home until our baby is old enough not to need to nurse in public. This is, of course, despite the fact that the World Health Organization recommends breastfeeding for at least two years.

It’s easy to surmise that the reason is this:

Since the 1970s, women’s bodies have become far more hyper-sexualized than they previously were. Women’s bodies are used to advertise everything from beer to clothing (despite the fact that women are often unclothed in advertisements). Women’s bodies are portrayed, but often without faces; faces are cropped out or out of focus — a popular technique used to dehumanize.

The dichotomy of using breasts as a popular selling point while forbidding the nipple and condemning mothers for feeding their children in public speaks volumes about our society’s repeated attempts to control women’s bodies.

Yes, you may expose most of your breast in order to sell me beer.

No, you may not expose any part of your breast in order to feed your child.

Perhaps social media is to blame, at least for the wide dissemination of this opinion. Maybe people felt like this in the 1970s as well, but it wasn’t as loud or proud, thanks to a lack of public forum on which to spew puzzling disdain for the sight of a mother feeding her child.

Related: 10 Incredible Facts You Might Not Know About Breastfeeding

Whatever the case, the clip of Buffy Sainte-Marie breastfeeding Cody on Sesame Street remains a powerful relic of a time when something that should be so mundane could be featured on a kids’ show as an effort to educate children, without the backlash that would surely come today.

It’s 2017, and the notion of a mother breastfeeding openly on TV is far more controversial than it was decades ago. Why is this? What do you think?