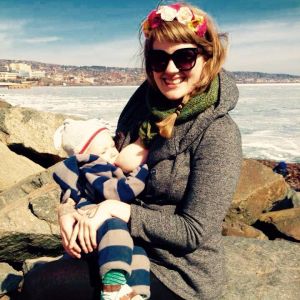 In recent years, many moms have embraced the act of posting breastfeeding photos on social media as part of our effort to normalize nursing. The reaction is always the same: lots of support and celebration, lots of oohs and ahhs, but also a plethora of insulting, attacking, disgusting comments.  No matter how many times this happens, I am always stunned by the ugly reactions people have to a mother feeding her child.

When my son was just a few days old, I went to the grocery store, just him and me.   As a newly postpartum mom, I should have been home resting and sending someone else to the store for me, but as a single parent with limited support, that was not an option.  So I bundled him up in my Maya Ring Sling and proceeded to do my shopping.  I had fed him before we left home, but in the middle of the store he started to cry.  I didn’t yet know how to utilize the sling for breastfeeding, so I couldn’t walk and nurse at the same time while pushing my cart.  I looked for a place to sit, but the only option was a bench right near the front door, where lots of people were milling around and I would be in full view, and I was too scared to deal with that at the time.

So, instead, I left my cart full of groceries and went and hid in the bathroom.  There was nowhere to sit, so I went into a stall.  The bathroom smelled awful and it was filthy.  I tried to balance my floppy, fragile new baby while I struggled to get my shirt up and my nursing bra unhooked.  I was terrified the entire time that I would drop him, or that he would pick up some nasty germs from being in the bathroom.  It was a disgusting, humiliating experience.  I swore I would never do that again. 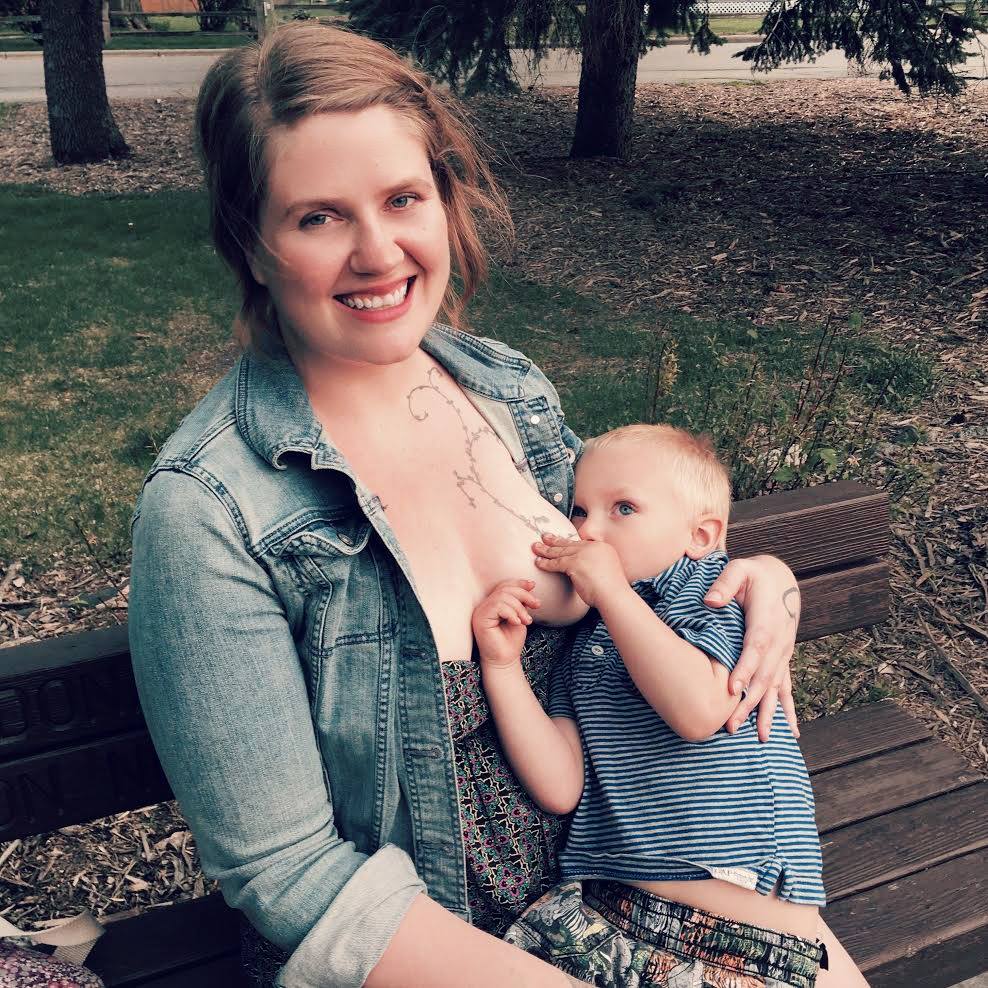 I tried using a blanket to cover up a few times, but I quickly realized how inconsiderate that was to my baby.  He hated being covered.  He clawed at the blanket, cried, and pulled it off as soon as he was old enough to have the strength to do so.  I wouldn’t want to eat with a blanket over my head; why should he be forced to?  Anyone who demands that a mother cover her breast and her baby with a blanket has likely never nursed a child and has no concept of what a hassle it is to cover and hide.

Another comment we often receive is “Pump and put it in a bottle!”  I am shocked that people can have such strong opinions about subjects they are clearly ignorant about.  Not every woman can pump.  I had an ample supply for my son, yet I could never get more than an ounce or two via pump; I just never responded to it.  Pumping also takes a lot of time and effort.  We would need to buy a pump and bottles, sanitize everything, make time to pump, hope we produce enough milk, and carry the supplies around everywhere in case our baby gets hungry.  Pumping can also cause oversupply issues.  Why should any mother go to such lengths just so some strangers don’t have to see her breastfeeding?  Especially considering the fact that averting one’s eyes and looking away from a nursing mother is probably one of the easiest things to do in the entire world.  It takes zero effort to look away.  It takes lots of effort to pump, store, and carry breast milk.

The social conditioning and lack of critical thinking that is rampant when it comes to public breastfeeding is very disturbing.  It’s interesting how some people are absolutely horrified by a Luvs diaper commercial that shows breastfeeding, but they likely wouldn’t even blink at an ultra-revealing Victoria’s Secret commercial, nor would they complain about women in bathing suits at the beach.  A mother nourishing her child has become much more offensive than severe oversexualization of women in our culture.

Some people say we are rude or inconsiderate for breastfeeding without hiding, but I find it much more inconsiderate for adults to put their petty desires above the needs of a child.  Babies need to eat.  Mothers need to feed them.  Period. 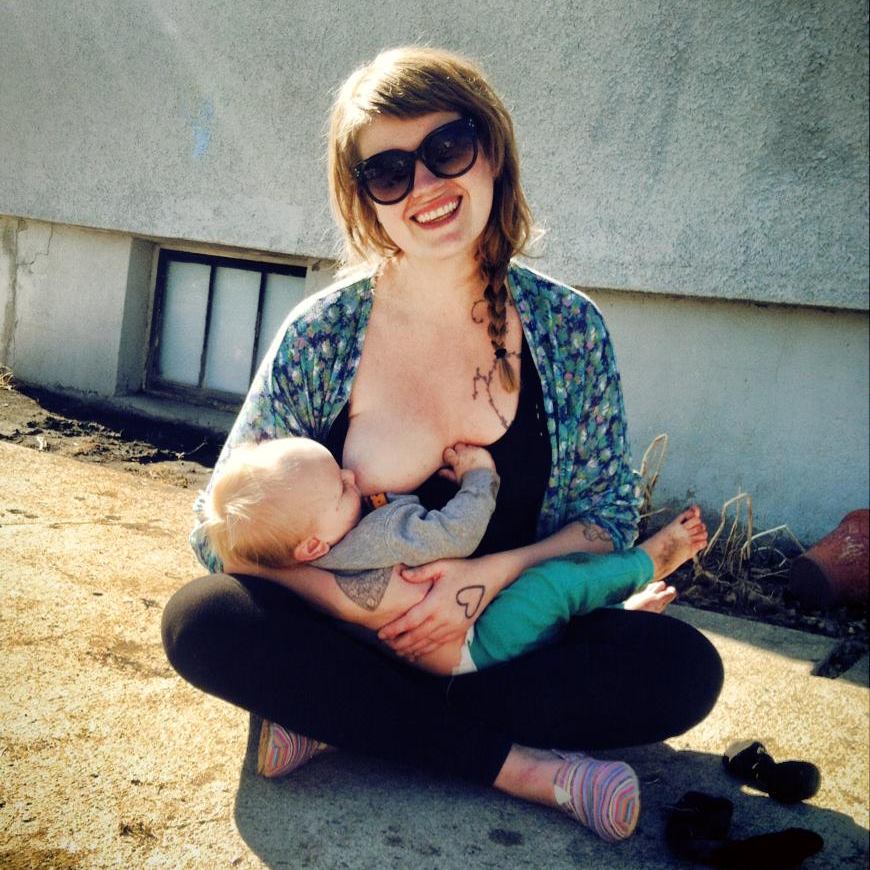 We will keep breastfeeding as openly or as covered as we feel comfortable with, because it is our body and our children we are nourishing.  Every time we get hateful comments about nursing in public, we will be inspired to do it even more.  We will support each other and stick together against the nay-sayers.  Every time we post a breastfeeding photo, we inspire more mothers to breastfeed in public.  We will continue to do so until our society has a normal reaction to breastfeeding– something more like “That is a mother feeding her child,” and less like “OMG PORN.”

The best part is that our right to breastfeed in public is protected by law!  It is exempt from public nudity laws.  Anti-public-breastfeeders cannot stop us, no matter how vicious they get, no matter how much they harass and berate us.  We will feed our children when they need to be fed.  Anyone who finds it offensive is more than welcome to stop staring and utilize their neck muscles to look away.  Anti-public-breastfeeders may want to ask themselves some questions: why does breastfeeding horrify them so much?  Is this really the worst thing that can be seen in public, or are there bigger issues to worry about?  Why are tiny bikinis and provocative underwear commercials perfectly acceptable, but a mother feeding her child is not?  Why are breasts so scary, but only when used to feed a baby?